I’ve been working on the bird taxidermy at Gallery Oldham for the past few weeks. Mainly I’ve been reshaping and cleaning feathers on mounts and then bagging them to keep off any industrial dust until they are moved to new storage.

I also have been remounting the parrot collection. The collection consists of about 30 ex parrot mounts (insert Monty-Python joke here) that are currently stored in boxes with tissue paper. The parrots either died of natural causes in captivity or were seized at UK airports from people trying to illegally smuggle them into the country.

The mounts were used at an exhibition at Oldham Museum in 1993 entitled “Parrots: In the wild, art, literature and humour.”

The exhibition actually toured across many museums in the UK including the Manchester Museum, Liverpool World Museum, and Oxford Natural History Museum and proved so popular it was given a second run. I’ll talk a little more about the history of the exhibition below, as it was valuable for me to see all the paperwork that went with running it, but first some photos of the work I’ve been doing:

As I mentioned, this is how the parrots are currently stored. Unfortunately this leaves their tails and feathers open to being squashed, and in the case of the Regent Parrot below, the tail has completely detached. 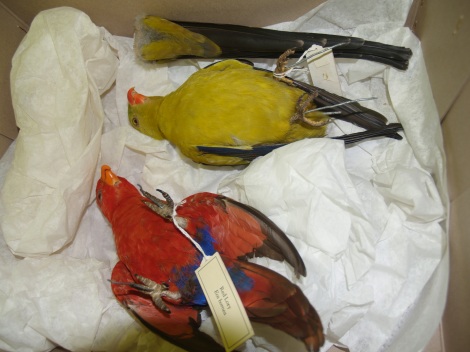 In the case of the Military Macaw, the tail is so long that the bird had to be bagged. At present there are no spare mounts big enough for the specimen to stand on, so one may have to be built. 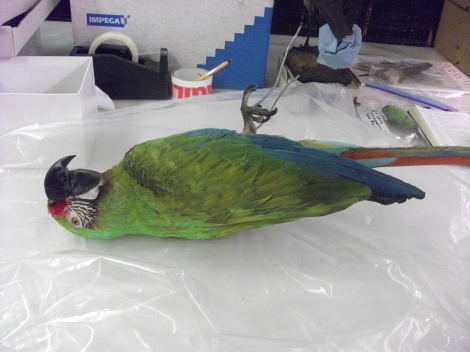 I’ve mainly been taking old bases and drilling holes in them to match the wires protruding from the parrot’s feet. This is a temporary measure so they can stand upright and are less susceptible to damage. I actually love work like this. I enjoy working with my hands and building things. Plus it’s very satisfying to see the bird once it’s upright. 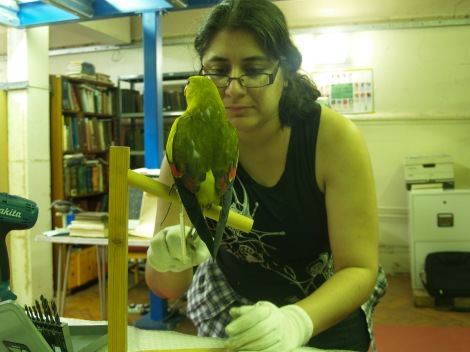 The regent parrot’s tail has been bagged. I temporarily reattached to see how it looked, as you can see from the pictures but it will need more stable reattachment. It seemed to be stuck on with clay and we will be consulting conservators. 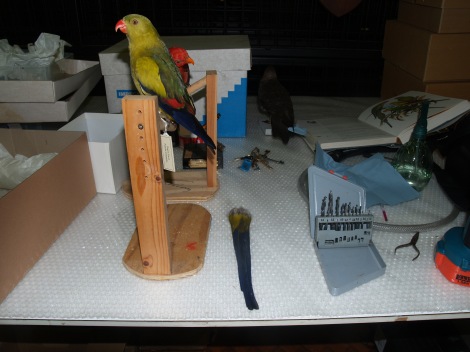 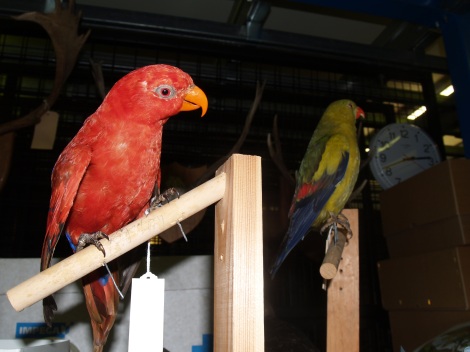 Back to the exhibition’s history. I found a folder with receipts, correspondence, paperwork, old posters and flyers regarding the exhibition as it toured around the UK. This was extremely valuable for me to look at, as I’m currently assisting Patricia Francis with exhibition planning for an exhibition about fish, and seeing how everything tied together during an exhibition was very helpful. 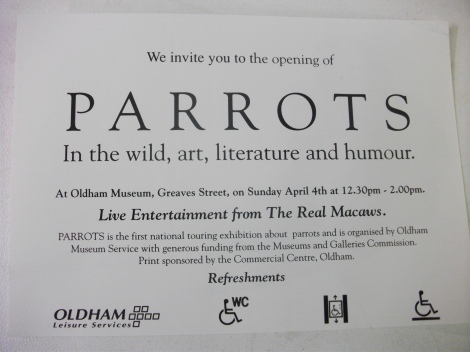 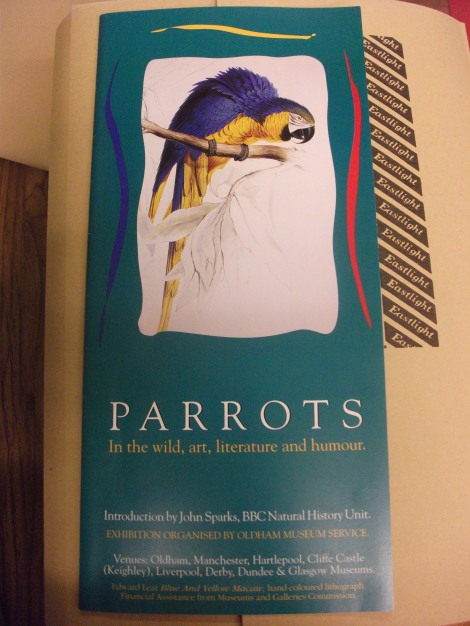 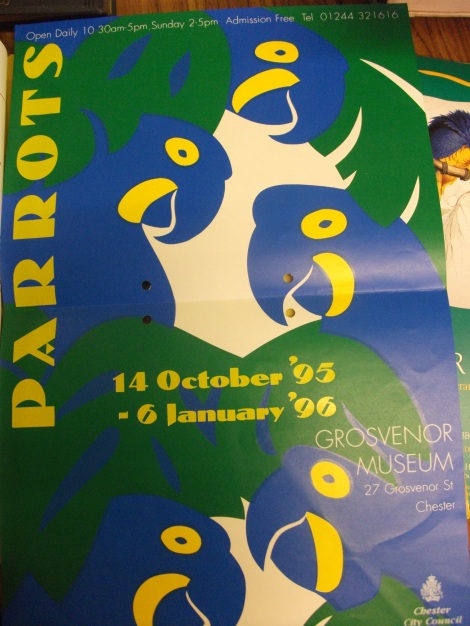 The exhibition itself consisted of 3 wall standing showcases covering the natural history of parrots in general and 3 freestanding showcases devoted to parrot species by region (Pacific, Afro-Asian and Neotropical.) Also included were prints, drawings, artwork and a 3D recreation of a flock of parrots which hung above the centre of the space. 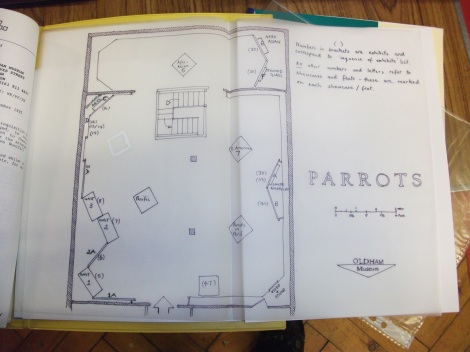 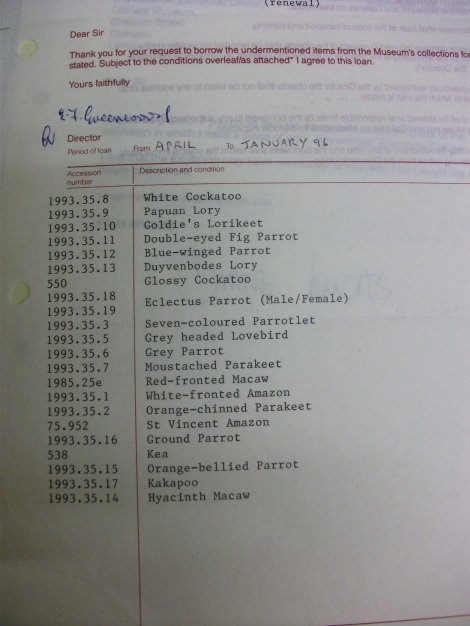 One of the central themes of the exhibition was how people’s attraction to parrots (the fact that they can talk, are funny, are colourful) is sadly the also the parrot’s downfall. Thousands of them are captured for the pet trade every year, and many do not survive the journey and conditions. In addition, parrots are highly intelligent and need almost constant attention, otherwise like humans, they lash out in frustration and engage in self harm or biting. They also have one mate in the wild, and tend to see one human as their mate.

Perhaps it is best to just let them fly free in the wild rather than trying to control such colourful personalities for our own amusement. 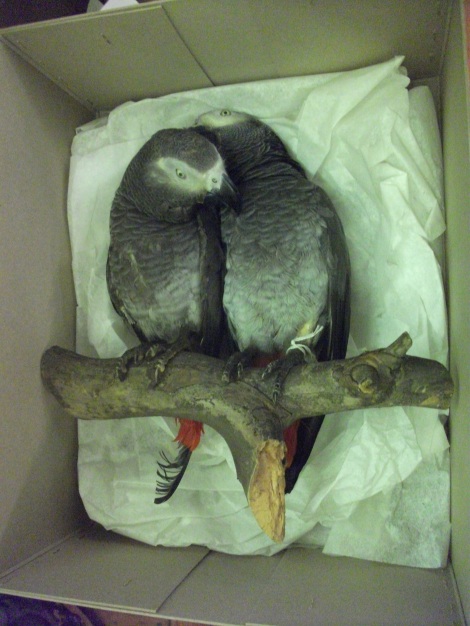 One response to “Parrots”