On the evening of Friday March the 23rd, I attended the opening of the Alan Turing and Life’s Enigma exhibition at Manchester Museum. As part of my CPD plan I wanted more experience working on exhibitions planning, so seeing a newly opened exhibition was inspiring and exciting for me.

The exhibition is about Turing’s work on Morphogenesis, the process by which living things grow and form. Morphogenesis literally means “beginning of the shape.” This means anything about a living creature’s physical structure (including the pattern on a leopard’s coat, the arrangement of seeds within a sunflower or the swirl of a shell) is formed through the interaction of chemical substances known as morphogens. 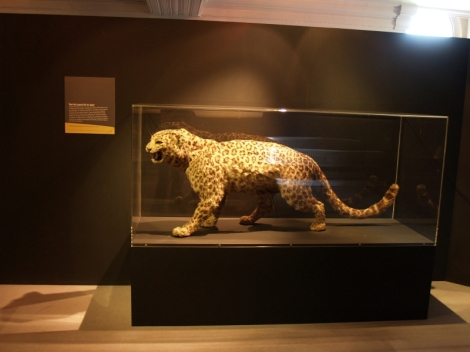 In terms of design, the exhibition takes much of its inspiration from 1950s graphics, with a large timeline about Turing’s life and work dominating the wall as the visitor walks into the room.

Objects are displayed in glass cases in the centre of the room, including some of Turing’s own notes and papers on morphogenesis, mathematics and computing.

Below: Diagrams drawn by Turing. On the left, studies on understanding the arrangement of leaves on a stem. On the right, a diagram drawn by Turing to understand why Fibonacci numbers continue to appears as living things grow: 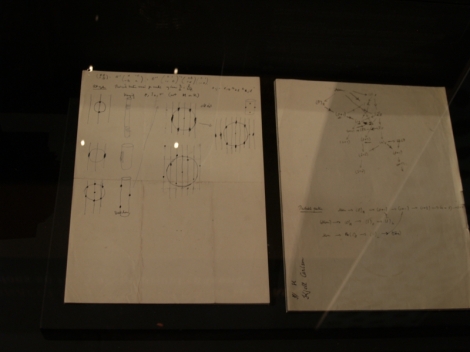 The exhibit displays the many influences on Turings work. Included are a children’s book called Natural Wonders and a copy of Snow White and the Seven Dwarves. Turing was interested in the scene in the Walt Disney Film where the wicked queen drinks a chemical to transform herself, similar to his work on morphogenesis. 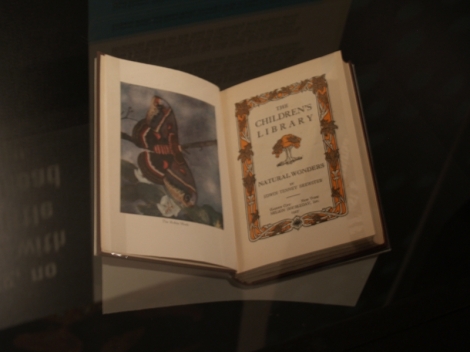 D’arcy Thompson’s book On Growth and Form was perhaps the biggest influence on Turing’s studies into morphogenesis. Thompson argued that Biologists should not ignore maths. Turing took this to heart and used mathematics to explore how natural forms might be produced. Further work continues in this field today, including studies into Fractals in Nature.

In Turing’s day, computers were slow, massive and clunky. Today, computers can generate high quality images of fractals in which patterns that resemble the swirl of shells, fern leaves and seahorse’s tails can be see. 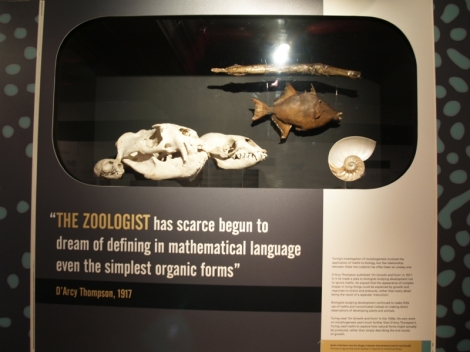 The exhibit does not shy away from the fact that despite Turing’s genius and contribution to the war effort, he was still persecuted as a homosexual man in a time when same-sex relationships between men were illegal in Britain. He was given female sex hormones to “cure” his homosexuality. While he was studying the effects of how chemicals in living things early in growth caused them to change. the government were forcing him to change his own body with chemicals. In 1954, Turing committed suicide by eating an apple poisoned with cyanide.

The exhibit ends on this note, alongside testimonials from people who were influenced by Turing’s incredible work. It is a shame that at the time Turing’s work on morphogenesis had little impact (mainly due to computers not being advanced enough in the 1950s), but today is highly influential among Biologists, Chemists and Mathematicians.